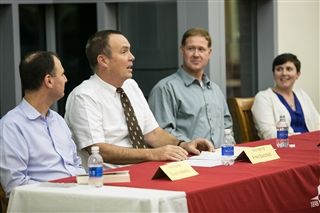 Four teachers sat down to discuss their journeys in writing and publishing.
On Thursday, October 29, 2015, four current faculty members spoke with an audience in the McCarthy Library about navigating the world of book-writing.

Chuck Abdella, Fred Borchelt, Russ McClintock and Diane Mulligan may teach in different subjects and prefer vastly different genres, but they share a common passion for the written word. Each of these four teachers have published one or more books, and shared their perspectives of navigating the world of professional authorship with a crowd of students, fellow teachers, parents, and alumni.
The four writers offered advice from the idealistic to the practical, and engaged in a question-and-answer session with the crowd.

Kicking off the panel was Chuck Abdella, whose first novel The Outcasts: The Lies of Autumn was released earlier in 2015. He had always been interested in writing, but life got in the way. It was during a recovery from surgery that prompted him to sit down and start writing Outcasts, and from there he says, the words started flowing. “What was attractive to me about fantasty was the ability to create my own world.”

Chuck's wife encouraged him to take a course on publishing, and now that he has moved past the many rejections the manuscript faced during this process, Chuck is simply overwhelmed by how much his readers have enjoyed the story. “The key," notes Chuck, "was finding my voice and sticking with it.”
Fred Borchelt engaged the audience right from the start by repeating his daily class time group mantra: “Books are good…all the time. All the time…books are good!” In contrast to the vibrant fantasy world crafted by Chuck, the format of Fred’s book is driven by reflections on his own life experiences. His published works include a book and a series of “Devotionals” and Christian articles. The stories he shares in Power 10 (inspired by his days as an Olympic rower, when he would put all of the energy he could muster into ten powerful strokes) he describes as rowing lessons embedded in vignettes from lessons he has learned throughout his life.
For Russ McClintock, "the experience of writing, of finding your voice, is absolutely critical for any writer.” The process of writing, reflected Russ alongside his fellow writers, is “trying on different voices, until eventually you develop your own.” He echoed the sentiments of his colleague Fred in describing his envy of fiction writers who harness their imaginations on a daily basis.

"History writing is not simply looking things up and writing them down." In describing historical non-fiction writing, Russ compared the study of history as putting together a jigsaw puzzle without all of the pieces, and all of those pieces fit together in a variety of ways. “It’s exploration, and not being afraid to look at things from a different angle.” Russ discussed his trajectory of growth as a writer, starting in a black-and-white fact-based realm that slowly became a true curiosity and appreciation for unlocking the mystery of one of the most written-about figures in history. He became hooked by the period in United States history in between Lincoln’s election and the start of the Civil War around the time of southern secession, and turned his ideas into a Masters thesis, then a PhD dissertation, and then a book.
Diane Mulligan is currently in the midst of her third novel, but she's been writing every single day. "I could write a new story every day for the rest of my life. So I write every day." She highlighted the importance of taking advantage of the eyes and minds of fellow readers and writers: "it truly takes a community of writers." While she finds it exciting to write, Diane discussed the importance and challenge of making it equally as exciting for the reader. The question posed frequently to Diane, especially because her books are contemporary fiction, is “which one of your characters is you?” to which she replies: “there’s a little bit of me in every single one of my characters.”

Following the writers panel and Q&A, guests had the opportunity to buy signed copies of the teachers' books. Find more information about Diane, Russ, Fred, and Chuck and their books on the McCarthy Library page.
What’s next for these teacher-writers?
The Outcasts is the first in a three-story arc, and Chuck is currently working on the second novel in the series. Diane shared with the audience that she is in the final stages of a contemporary fiction novel she hopes will come out soon. Russ is currently researching his next book, a study of Lincoln's rival Stephen A. Douglas. Fred mentioned the lifetime of stories he continues to accrue, and sees potential for a “Power 50” sequel to his book.

Keep your eyes open for more compelling works from these hardworking teachers!
Miss this event? Check out pictures of the authors and their audience!
Back