Ambassador Ricciardone, Vice President of the Atlantic Council and the Director of the Rafik Hariri Center for the Middle East, addressed students, faculty, and guests and met with the school’s Model United Nations Club. As a graduate of another Xaverian Brothers Sponsored School, Malden Catholic, Mr. Ricciardone remarked that he felt “right at home with the tie of Xaverian Brothers education.” He spoke to students and guests of the ethical formation he and his family received that has followed him throughout his professional life.

Mr. Ricciardone’s talk, Persevering in Our Efforts to Bring Peace and Stability to the Middle East, focused on addressing the violent conflicts sweeping the Middle East that are driving millions from their homes and threatening American and allied security and economic interests, raising the most profound humanitarian and moral concerns.

The Atlantic Council’s Middle East Strategy Task Force is a bipartisan organization under former Secretary of State Madeleine Albright and former National Security Advisor Stephen Hadley. It aims to develop a strategy for American engagement with Europeans and Middle Easterners who share vital interests in resolving the current conflicts. After describing an overview of the Middle East in the 20th century and how a breakdown in cultural identity has played a factor in the region today, Mr. Ricciardone discussed the project’s approach and sketched its emerging conclusions in his lecture.

The Atlantic Council believes “that sound, effective American international strategy has to be…broader than simply security and destroying threats.” Its goal is to regenerate regional order based on preferably well-governed states with a policy drawn up by America, its allies, and friends throughout the world. The Atlantic Council reached out to world leaders in business, the media, academia, and public service with the aim of achieving this goal. From addressing religion, refugees, governance, economy, and eliminating the threat of violence, “threaded through the whole structure and all chapters is the importance of education.”

Headmaster Michael Welch ’78 introduced Mr. Ricciardone, remarking that, “now well into our second decade of the Center for Ethics, Saint John’s High School continues to be humbled by opportunities such as the one before us this evening.”

“After a productive career in the Foreign Service such as the one Ambassador Ricciardone has achieved, one could fully expect him to take a bow and exit the stage, rightly proud of a job well done… And yet it seems his Xaverian education would suggest otherwise. There is still much work to be done, as we all know, all too well. One would be hard-pressed to pick up any newspaper on any given day and not see that the world still very much needs the expertise and experience of a Francis Ricciardone.”

Senior Vincenzo Malo offered the opening prayer, drawing on the words of Pope Francis from his visit to the Middle East in 2014: “Peacemaking calls for courage, much more so than warfare. It calls for the courage to say yes to encounter and no to conflict: yes to dialogue and no to violence; yes to negotiations and no to hostilities; yes to respect for agreements and no to acts of provocation; yes to sincerity and no to duplicity. All of this takes courage, it takes strength and tenacity.” Following our reflection of Pope Francis and the intercession of Gabriel, we pray tonight for our world leaders and those who work in diplomacy to have the courage, strength, and tenacity in their work for peace.”

Several students (Zach Coderre ’16, Alex Crolais ’16, Andrew Fraser ’19, Paul Igo ’16, and Jack Mao ’18) had the opportunity to ask Mr. Ricciardone questions ranging from his career in foreign affairs to his views as a diplomat on dealing with the Islamic State and past global issues. “There is an enthusiasm here,” said Ricciardone, referencing academic and extracurricular programs, like Model UN and the rapidly growing Chinese curriculum, “which means you are an outward-looking community at Saint John’s. This is critically important.”

SJ students and the global perspective

Prior to his lecture, Mr. Ricciardone stopped by a Model United Nations meeting and spoke with students in the club. He encouraged all interested students to pursue careers in public affairs, and to “keep your minds open. Experiment and think about the things you find interesting.” For him, the allure of foreign languages is what pulled him outside of the country, and his career developed from there. He also emphasized the importance of empathy and seeing the other party’s perspective, through the filter of language, culture, and politics, an underlying theme of his lecture.

Ambassador Ricciardone shared that he wanted to work in challenging places, like Egypt, Afghanistan, Iraq, and Turkey, because for him the work he accomplished there was more meaningful. In true Xaverian fashion, Mr. Ricciardone summed up his career to the students simply: “We live for something bigger than ourselves. We live to serve.”

Before joining the Atlantic Council, Francis J. Ricciardone was a career Foreign Service officer in Washington, the Middle East, Europe, and Asia, including assignments as ambassador to Turkey (2011-14), chargé d’affaires and deputy ambassador to Afghanistan (2009-10), ambassador to Egypt (2005-8), and ambassador to the Philippines and Palau (2002-5).

He served as Secretary of State and former Abdella Center for Ethics lecturer Madeleine Albright's special coordinator for the transition of Iraq from 1999-2001, where he supported the reestablishment of the democratic opposition to the Saddam Hussein regime. Secretary of State Colin Powell assigned him in 2004 to organize the new US Embassy in Baghdad to replace the Coalition Provisional Authority.

He worked with Egyptian, Israeli, and other international military forces as chief of the Civilian Observer Unit of the Multinational Force and Observers in Egypt’s Sinai Desert (1989-91). In 1993 he served as political advisor to US and Turkish generals commanding Operation Northern Watch in northern Iraq, based in Turkey.

Headmaster Michael Welch notes that "clearly, we live in a global community, one in which the inter-relatedness of varying cultures and faiths can enrich one another or not. Our students, more than we ever had to, will be called upon to engage these issues in their future personal and professional lives. This lecture was very much in line with our mission, in preparing our students in all aspects of their lives to engage the world."
“We live for something bigger than ourselves. We live to serve.”
- Francis J. Ricciardone, 2015 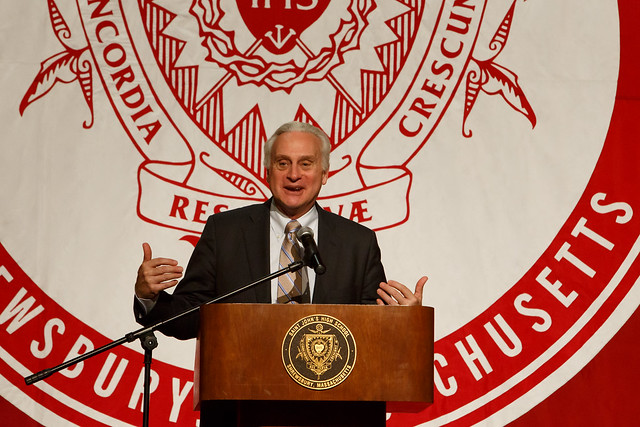