A story of hope, faith & forgiveness

Hanging in the Coaches Pavilion during lectures, prayer services, award ceremonies and galas are banners that highlight the five aspects of the Xaverian Charism (humility, trust, zeal, faith, and compassion).

The Compassion banner, which reads "It is through you that God desires to manifest Love to the peoples of the world in these times," was draped behind Ms. Immaculée Ilibagiza as she addressed hundreds of members of the Saint John's community. Her lifetime spent sharing the message of God's love, despite enduring the horrors of the Rwandan genocide, is truly in line with the mission of Saint John's.

“Schools, like Saint John’s, that combine learning with faith are so important,” Immaculée shared, “because education without heart can only damage.”

An Interview with Immaculée

by Chang Feng ’15 & Mano Sundaresan ’15
What is the solution to hatred? We have tried suppression, negotiation, mediation, and yet every day we hear stories of killings and conflicts. On April 29, 2014, Immaculée Ilibagiza, a Rwandan genocide survivor, brought the Saint John’s community her answer: love.

Immaculée Ilibagiza was raised in a Catholic environment in Rwanda. As Tutsi, she was caught up in the age-old struggle between her tribe and the Hutus. The tension escalated into genocide in 1994, when the plane carrying the Hutu Rwandan President Juvénal Habyarimana was shot down. At the time, Ilibagiza was only a college student. She was forced to hide in a three foot by four foot bathroom in a local pastor’s house with seven other women for three months.

“Not one day, not one hour in the bathroom was peaceful enough for us to say, ‘We are good; no one would touch us,’” Ilibagiza said. “We were waiting every single moment for somebody to kill us.”

In addition to constant fear, Ilibagiza faced a challenge to her faith. She would constantly pray in the bathroom, but she could not fully understand the prayers.

“Every page I remember opening in the Bible said to pray for the persecutors, and I thought, God, please don’t ask me to do this – how can I pray and forgive those who are trying to kill me?”

In her three months of meditation, she constantly questioned the motives behind the endless slaughter in Rwanda. Finally, she reached an answer: loss of love. She knew from that moment that she needed to be a loving person, but she still could not forgive.

“I would ask myself what our Lord Jesus Christ would do, and after a lot of thinking, I looked at Mandela and Gandhi. They stood up for love, peace, what was right, despite their suffering. They wanted the world to change, and all that helped me to realize: am I going to be driven by madness? Or am I going to be that loving person who stands up for what is right, no matter what?”

This experience taught Ilibagiza something that she would never have learned otherwise.

“And that is the sad part,” said Ilibagiza, “it looks like pain has its way of teaching us. When things are going well, we take things for granted. But when we are pushed through fire, we learn.”

When she finally left the cramped, musty bathroom three months later, Ilibagiza learned that her family, including both of her parents, had been killed. But she was ready to forgive. In that three by four coffin, Ilibagiza had been miraculously enlightened with a passion to love. Today, she travels around the world and gives lectures about her experience, a lifestyle that has given her great emotional comfort.

“I give two speeches every week. I always talk about my parents and others who have died because I feel that they will come back for a moment. It has been 20 years; however it still feels like yesterday. What has changed is that a lot of healing has taken place for me and other survivors.”

Indeed, Ilibagiza and others have definitely recovered emotionally – a “healing” of sorts, as she puts it. But healing that, if ever complete, will forever leave a scar of the horrendous conflict that was the Rwandan genocide.
About Immaculée

In addition to finding faith and hope while in hiding, Immaculée also taught herself English, already fluent in Kinyarwanda and French. Now a bestselling author, Immaculée’s story has been shared with millions around the world. She became an American citizen in 2013.

She has appeared on 60 Minutes, The CBS Early Show, CNN, EWTN, CBS Evening News, The Aljazeera Network and in The New York Times, USA Today, and many other international media outlets. She was recently featured in Michael Collopy’s Architects of Peace project, profiled aside Mother Teresa, Jimmy Carter, Nelson Mandela and the Dalai Lama.
Immaculée’s first book Left to Tell; Discovering God Amidst the Rwandan Holocaust became a New York Times bestseller in 2006. To date, it has been translated into seventeen languages and has sold over one million copies.

Immaculée has been recognized and honored with numerous humanitarian awards including The Mahatma Gandhi International Award for Reconciliation and Peace and the American Legacy’s Women of Strength & Courage Award.
“Schools, like Saint John’s, that combine learning with faith are so important, because education without heart can only damage.”
- Immaculée Ilibagiza, 2014 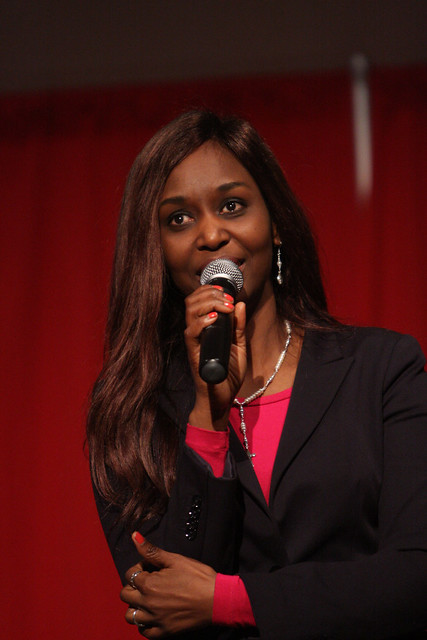