A world of peacemakers

“The world I enter after high school is a world that is in dire need of peacemakers. And like our speaker tonight I challenge you to reflect on the good men and women who have been peacemakers in your lives...The peacemakers I have known provide hope for a better tomorrow that ignites a commitment to social change. It is clear that this hopefulness is what drove Sargent Shriver to live a life full of energy and joy with enthusiasm to help others.” ~ Kevin Harrington ’13
Excerpt from opening prayer at The 10th Abdella Center for Ethics lecture

Faith, Hope, and Love in Action

The Saint John’s community gathered for a second time in 2013 to welcome a renowned speaker to the Abdella Center for Ethics. On April 3 and 4, Mark Kennedy Shriver visited Saint John’s to share stories from his recently authored book A Good Man: Rediscovering My Father, Sargent Shriver and to discuss faith, hope, and love in today’s society.

In Shriver’s book, he uses the example of his famous father to emphasize the vital role of faith and unconditional love in dealing with both the joys and the challenges of modern family life. It was around this book and his father’s legacy that Mark focused his talk. As the son of Sargent Shriver, first director of the Peace Corps and advisor to presidents Kennedy and Johnson, and Eunice Kennedy Shriver, founder and director of the Special Olympics, Mark referenced the balance that his family has had to strike between working hard in the public eye and maintaining a solid sense of family and faith. In addition to instituting programs that affected widespread social change in America and around the world in the twentieth century, Sargent Shriver, his son recalled, was up for Mass every single morning, without fail. His true legacy was not one of greatness or glory, but of humble faith in God and reflecting that out into the world. One of the lasting messages that his father left Mark was to harness the “faith that commands us daily to do what is good...that faith, combined with action, can help us save the world.”

After his father’s passing, Mark and his family kept hearing from dignitaries, friends, and strangers that his father Sargent was “a good man.” “I learned through the repetition of that phrase,” he shared, “that it meant something different than ‘great man.’” The earnest words of the ‘ordinary’ people – the waitresses who served his father, the garbage man who shook Mark’s hand days after his father’s death – held more weight for him than all of the foreign luminaries, famous figures, and powerful politicians. They showed for him that his father left a legacy of love that impacted individuals in his neighborhood
and around the world.

Mr. Shriver reflected that his father was “unwavering in his commitment to creating systemic change,” and he is forever in awe of how tirelessly his father worked for the marginalized of society. It is this torch that “Sarge’s” son has taken up though his work with Save the Children, where he is currently the Senior Vice President for Strategic Initiatives and Senior Advisor to the CEO. Mr. Shriver also founded the Choice Program, which serves delinquent and at-risk youth through intensive, community-based counseling.

As he reflected on during both his lecture and the discussions that followed, Mark's commitment to serving the underserved and aiding children who have been affected by disasters is a direct result of the example his parents set for him “My search for goodness has led me here to Saint John’s. I am honored to be with the good men and women of Saint John’s, joined as contemplatives in action.” Shriver challenged those present to act on what they steadfastly believe, and cautioned that “action without contemplation is incomplete, as is contemplation without any sort of action.”

Mark Shriver’s earnest message of faith, hope, and love was simple and powerful, and reflects the goals of the Saint John’s educational mission. “We can’t separate our personal religious views and faith from the decisions we make. It’s impossible.” Senior Kevin Harrington addressed Mark and the audience prior to the lecture. He spoke of his belief in the power of goodness and compassion in addition to his personal path to accepting and making the most of God’s plan.

Over the course of the two days that Mark Shriver spent visiting Saint John’s, he made a point to engage one-on-one with many students. Zane Ostoin ’14, Tom Carroll ’14, Mike Kotsopoulos ’13, Zach Coderre ’16, and Brian Le ’14 all asked Mark insightful questions, from balancing politics and religion to holding on to the memory and spirit of lost loved ones. He returned to Saint John’s the following day to sit down with a group of 25 students in Campus Ministry to answer more questions in a relaxed and informal discussion.

The purpose of the Abdella Center for Ethics is to encourage, promote and create a meaningful dialogue that provides a forum for the discussion, education and debate of ethical, philosophical and religious values in advancing social justice. Mark Shriver’s lecture was the 10th installment of the lecture series that was established by the Hon. Charles Abdella ’60 in 2003 in honor of his father. Programs like the Abdella Center at Saint John’s allow students the opportunity to actively engage with each other and explore issues in a new context outside of the classroom. Meg Curran, who has been teaching at Saint John’s for 31 years, proudly declared during Mark’s talk with students in Campus Ministry that “these students are going to make a difference. They’re going to change the world – they already do.” 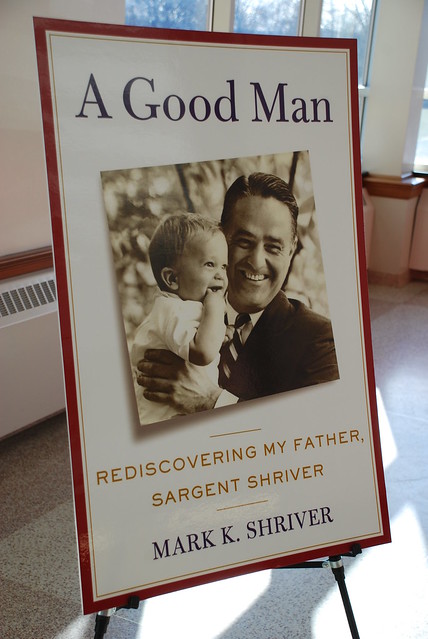 "Harness the faith that commands us daily to do what is good...that faith, combined with action, can help us save the world.” 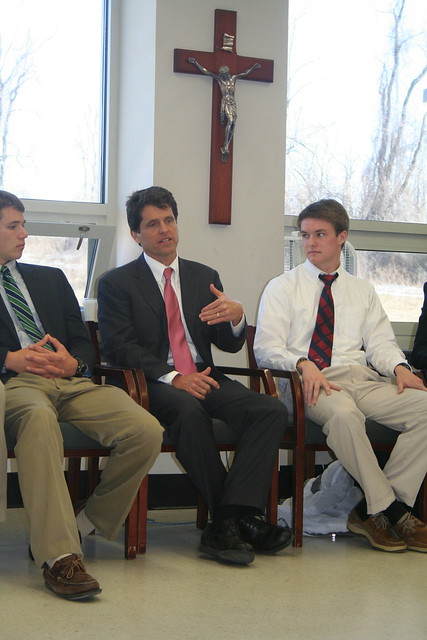 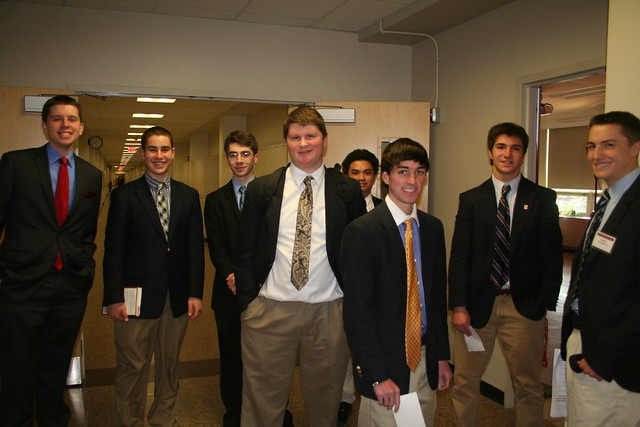