About the new Makerspace

The school plans to overhaul space in the Ryken Center specifically geared to expand our engineering curriculum and robotics program.

Thank you to everyone from our community who made the launch of the Makerspace such a success!

Students and faculty gave presentations on recent projects and their plans for the future with this exciting new space and resources. Students, alumni, families, and board members joined the conversation in roundtable discussions on the future of engineering & robotics at Saint John's High School.

Still interested in joining the conversation? Check out the live stream of the event to see the presentations and share your ideas with us. Engineering, design, and creativity is a collaborative experience, and we want your input on the new Makerspace, Engineering at Saint John's High School, robotics, technology, and more! 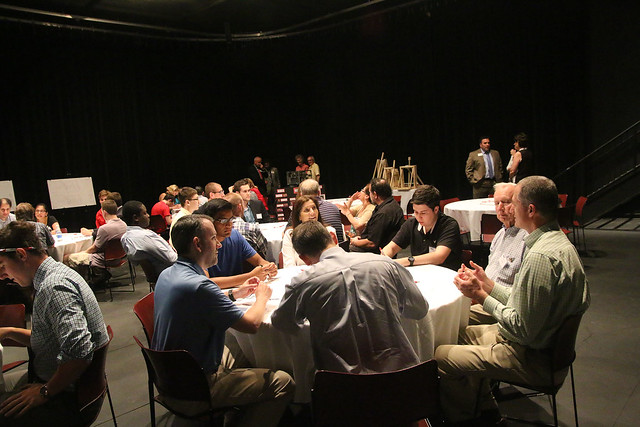 This year's capstone project in Engineering was to design, launch, track, and recover a weather balloon payload capable of taking pictures of Saint John's High School from 15 to 20 miles in the air (2-3 times higher than most commercial airline flights).

To accomplish the goal, the seniors designed a vessel which could maintain heat for the cameras and tracking device, chose effective equipment for attaching the vessel to an appropriate weather balloon also of their choosing, chose and correctly programmed camera equipment light enough to make it above the stratosphere, chose and programmed a transmitter to relay to the ground the exact location and altitude of the balloon in real time, communicated with the balloon while it was in flight, and learned to forecast weather sufficiently to predict the balloon's most likely path once launched, so that the FAA could warn pilots of all kinds of planes of the exact location of the unmanned flight.

Saturday, May 20, two seniors, Jack McCabe and Spencer Peters, assisted by Steven Devaney and Edward Tonelli launched the balloon from Northfield Mt. Hermon into upper level winds of over 100 MPH. Through careful planning by the Engineering class' weather team, the balloon was forecast to land around 75 miles from the launch site. When the balloon landed in the Moose Sanctuary of Sharon, MA, it took the team less than 10 minutes to locate the parachute and payload at the top of an 80-foot oak tree in a forest of that Audobon sanctuary land.