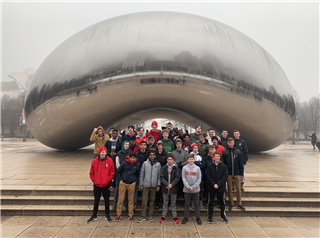 An Exceptional Experience in Chicago at MUNUC XXXI

An Exceptional Experience in Chicago at MUNUC XXXI
Four Days of Debate, Comedy, Food, and Fun
[CHICAGO, ILLINOIS, February 6-10---] Immediately after our conference at Brown University in early November, St. John’s Model UN shifted gears to the Model United Nations of the University of Chicago conference (“MUNUC”) set to take place in February 2019. We met every Thursday after school to discuss tactics, rules, preparation, and what to expect. Flying out on February 6, there was an excitement coursing through the team. Upon arrival, we settled into our new hotel because after nearly 30 years at the Palmer House Hilton, MUNUC moved this year to the Hyatt Regency.

On Wednesday night, SJMUN went to the Second City comedy show; a trademark Chicago experience. To continue this theme, on Thursday morning the group paid a visit to our friends at the Billy Goat Tavern owned by the Mr. Sianis, the father-in-law of Mark Constantinou ’01. While enjoying their famous “Cheezborgers”, Peter Stamoulis ‘22 managed to correctly pronounce a 32-letter Greek last name, which earned him a free soda! St. John’s delegates had a great opportunity to explore the city. Students strolled through Millennium Park, visited a seven-floor shopping mall, took in the Art Institute of Chicago, and more.

After Opening Ceremonies, the Model UN portion of the trip began with most of our students representing the United States this year in a variety of committees from the Security Council to the High Commission for Refugees, along with some interesting historical crisis committees like Herbert Hoover’s 1929 Cabinet or the 2003 Coalition Provisional Authority in Iraq. Although our activities were heavily dominated by committee, we made time for our annual MUN football game at Millennium Park on Friday morning (where Mr. Abdella led his team to victory over Mr. Browne’s team in -15 temperatures!). On our last night, we enjoyed both the company of honorary SJMUN member Mr. Walid Bitar and the best deep-dish pizza in town at Pizzeria Ora, where we were joined by president-emeritus of SJMUN Jack O’Leary ‘18. SJMUN alumnus Steve Caputo ‘11, who follows our exploits on Twitter @SJMUN, saw that we were in Chicago while he was passing through and joined our three faculty moderators, Mr. Chuck Abdella ‘92, Mr. Kevin Browne, and Mr. Steven Favulli for lunch. Our departure from the Hyatt Regency was notably early on Sunday morning, and our plane landed at Logan Airport in the afternoon where we were met by our friends with FTI Coach Lines/Foxy Travel, managed by Keith Menard ‘92.

MUNUC XXXI was a fantastic learning experience for all, and although awards cannot compare to individual growth, it is always great to recognize the ten students who were honored for their work in committee. Congratulations to Caleb Rocha ‘19 who was awarded Outstanding Delegate, the highest-level award in his committee (quite the honor!) along with Jack Durkin ‘19, Tom Donahue ‘19, Stephen Johnson ‘19, Walker Dauphin ‘19, Benjamin Coderre ‘20, Ansh Patel ‘20, Varun Subbiah ‘20, Ahura Shadfar ‘20, and Zach Blair ‘21, all of whom won awards. Of course, these awards would not have been possible without the hard work and preparation of MUNUC’s Head Delegates, Thomas Pickering ‘19, Andrew Fraser ‘19, and Jack Durkin ‘19, and the club’s faculty moderators.

On March 2nd, roughly 25 of the club’s members will head to Boston for BC High’s conference. Be sure to follow @SJMUN on Twitter to stay updated on the club’s activities.
Back