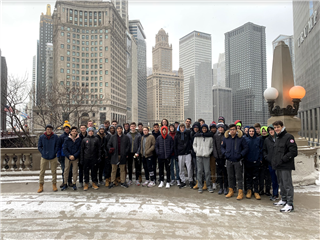 Amar Kapoor '21
Wednesday, February 5th marked the pinnacle of SJMUN's season, the annual Chicago trip.  36 students and their 3 faculty moderators, Mr. Chuck Abdella '92, Dr. Russ McClintock, and Mr. Steve Favulli, left class and boarded a Foxy Travel Bus (owned by Don Menard, P ’92, P ‘01) to Logan Airport.  2020 marked the 32nd year of the Model United Nations Conference at the University of Chicago, Saint John's is one of 4 original schools who have attended all 32 MUNUCs and we are the only one of those schools more than 50 miles away from Chicago. This year the Saint John’s delegation was assigned the nations of Rwanda and Germany.  Students represented these nations in exciting committees such as the United Nations Security Council, the World Bank, and others. We also had crisis positions in committees like The Cabinet of Brazil in 2009, The Cabinet of Armenia in 1920, and Barack Obama’s Presidential Campaign in 2007. Head delegates Ansh Patel ’20, Ben Coderre ’20 and Andrew Bird ’20 ensured all students, freshmen through seniors, were equally equipped and prepared to thrive in committee.

We are confident that several of our students were honored with awards, even though awards do not really capture success in Model U.N.  Unfortunately the list of award winners has not been released, yet. We will update when we have them.

For years, Chicago has been a defining moment in the high school experience for Model U.N. students, this year proved to be no different. Outside of committee, SJ students enjoyed their free time bonding with their brothers while visiting sites such as Willis Tower, the Bean, and the Museum of Science and Industry. Traditions continued as the whole group visited the Billy Goat Tavern (owned by Sam Sianis, father-in-law to Mark Constantinou ‘01). Additionally, the annual tradition of an SJMUN football game in Millennium Park continued this year ending in a tie between Team Abdella and Team McClintock after double overtime in the snow.  On our last night in Chicago, SJMUN was grateful to be welcomed once more to Pizzeria Ora, owned by a longtime friend of the club, Mr. Walid Bitar. To cap off the trip, all 36 SJ students and all 3 moderators broke bread together at Pizzeria Ora alongside SJ alums John O’Leary ’18, and Russell Johnson ’05 while enjoying Chicago’s finest deep dish pizza.

It is almost impossible to articulate the impact and importance of Model UN in the current political climate of the world.  MUNUC keynote speaker Mr. David Axelrod reflected this sentiment in his opening remarks, asserting the encouragement he feels that so many of the world’s teenagers are eagerly interested in giving up several days to try and solve the world’s many problems through the use of diplomacy and international cooperation.  Mr. Axelrod noted that he is inspired by the intelligence and tolerance of the young people he meets and believes they can help fix the broken world. This was a sentiment Mr. Abdella also touched upon when he spoke to the team at our first meeting after committee sessions began.