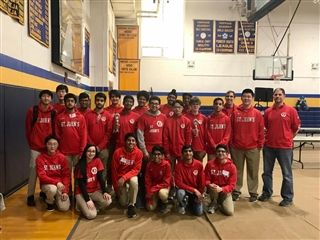 The Robotics Team also won the Inspire Award which is the top award given at FIRST Tech Challenge Competitions. Pioneer Robotics acted with *Gracious Professionalism* and was an inspiration to other teams both on and off the field. Throughout the year, they held several events to increase STEM
awareness in the local community. They proved themselves to be true role models.

The team will be participating in the State Championship this Saturday, March 7, at Natick High School.
Back