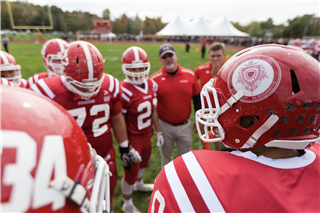 Shrewsbury, Massachusetts (June 6, 2022) – A new Thanksgiving Day tradition is set to begin this November as the Saint John’s Pioneers and the Malden Catholic Lancers battle on the gridiron as part of their regular Catholic Conference season on Wednesday, November 23, 2022. In a coin toss held on Thursday, June 2, it was determined that this year’s game will be held at Malden Catholic’s Donovan Field at Brother Gilbert Stadium in Malden, Massachusetts - with future games alternating with Pioneer Field at Saint John’s in Shrewsbury.
"As a Xaverian Brothers Sponsored School, much of what we do is steeped in long standing tradition. To begin a new tradition in partnership with a school within our XBSS network is exciting,” shares Saint John’s Headmaster Alex Zequeira. “Our schools share a commitment to Catholic education and a focus on the whole person making this game about more than a final score, but about a longstanding tradition of excellence and to the deep-rooted relationships that exist in our respective communities.”

“We are delighted to end our football season with a new tradition that will enhance the experience for both teams and provide tremendous enjoyment for our entire community,” stated John K. Thornburg, Malden Catholic President. “The Catholic Conference is regarded as one of the most accomplished sports conferences in terms of its winning reputation and we look forward to an exciting matchup.”
More information regarding ticketing will be released as the event nears.
Back