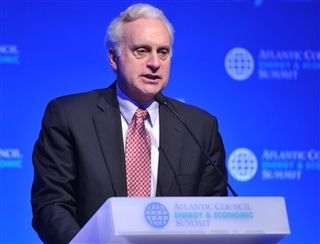 Ambassador Francis Ricciardone, of The Atlantic Council’s Middle East Strategy Task Force, will visit Saint John’s on October 15 to address students, faculty, and guests as part of the Abdella Center for Ethics.
The Abdella Center for Ethics at Saint John's High School is excited to announce the next installment in this prestigious lecture series.

Register by emailing abdellacenter@stjohnshigh.org by October 13, 2015.

Mr. Ricciardone’s talk, Persevering in Our Efforts to Bring Peace and Stability to the Middle East, will focus on addressing the violent conflicts sweeping the Middle East that are driving millions from their homes and threatening American and allied security and economic interests, raising the most profound humanitarian and moral concerns. As America heads towards elections next year, political polarization makes it all the harder for the current administration and next years’ candidates to articulate a vision for American strategy and leadership of our own interests in the Middle East. To address this need, The Atlantic Council’s Rafik Hariri Center has established a bipartisan Middle East Strategy Task Force under former Secretary of State Madeleine Albright and former National Security Advisor Stephen Hadley. It aims to develop a strategy for American engagement with Europeans and Middle Easterners who share vital interests in resolving the current conflicts. Mr. Ricciardone will describe the project’s approach and sketch its emerging conclusions in his lecture.

Francis J. Ricciardone is Atlantic Council Vice President and the Director of the Rafik Hariri Center for the Middle East. Before joining the Council he was a career Foreign Service officer in Washington, the Middle East, Europe, and Asia, including assignments as ambassador to Turkey, chargé d’affaires and deputy ambassador to Afghanistan, ambassador to Egypt, and ambassador to the Philippines and Palau.
He served as Secretary of State and former Abdella Center for Ethics lecturer Madeleine Albright's special coordinator for the transition of Iraq from 1999-2001. Secretary of State Colin Powell assigned him in 2004 to organize the new US Embassy in Baghdad to replace the Coalition Provisional Authority. He worked with Egyptian, Israeli, and other international military forces as chief of the Civilian Observer Unit of the Multinational Force and Observers in Egypt’s Sinai Desert. In 1993 he served as political advisor to US and Turkish generals commanding Operation Northern Watch in northern Iraq, based in Turkey. He speaks Italian, Turkish, Arabic, and French.

Headmaster Michael Welch notes that "clearly, we live in a global community, one in which the inter-relatedness of varying cultures and faiths can enrich one another or not.  Our students, more than we ever had to, will be called upon to engage these issues in their future personal and professional lives.  This lecture is very much in line with our mission, in preparing our students in all aspects of their lives to engage the world."

Saint John’s established the Abdella Center for Ethics in 2003 in memory and honor of George F. Abdella with his son, the Hon. Charles A. Abdella ’60. The annual lecture series complements the “whole person” education in Saint John’s academics and extra-curricular activities by exploring the role that ethical questions play in all aspects of modern life.