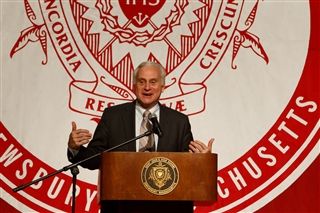 On Thursday, October 15, former United States ambassador Francis J. Ricciardone became the lastest lecturer in the Abdella Center for Ethics lecture series.
Ambassador Ricciardone, Vice President of the Atlantic Council and the Director of the Rafik Hariri Center for the Middle East, addressed students, faculty, and guests and met with the school’s Model United Nations Club. As a graduate of another Xaverian Brothers Sponsored School, Malden Catholic, Mr. Ricciardone remarked that he felt “right at home with the tie of Xaverian Brothers education.” He spoke to students and guests of the ethical formation he and his family received that has followed him throughout his professional life.

Mr. Ricciardone’s talk, Persevering in Our Efforts to Bring Peace and Stability to the Middle East, focused on addressing the violent conflicts sweeping the Middle East that are driving millions from their homes and threatening American and allied security and economic interests, raising the most profound humanitarian and moral concerns.

Not only did several students have the opportunity to ask questions of Mr. Ricciardone during his speaking program, but the former ambassador also met with SJ Model United Nations students in an informal setting after arriving on campus.

Find more about Mr. Ricciardone's visit and learn more about the topic of the 2015 Abdella Center for Ethics Lecture: diplomacy, public service, and how a global think tank hopes to mitigate tensions the Middle East through cultural understanding.

In true Xaverian fashion, Mr. Ricciardone summed up his career to the students simply: “We live for something bigger than ourselves. We live to serve.”

Browse through pictures of Mr. Ricciardone's evening at the Abdella Center.
Back