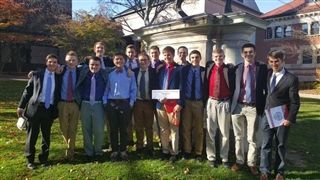 by Sam Malone ‘17 and Nat Newman ‘16
During the first weekend of November, the Saint John’s Model United Nations club went to Brown University's 19th annual simulation of the United Nations. 14 out of 25 delegates were recognized by Brown with awards.
Saint John’s sent 25 delegates to join BUSUN XIX’s 950 delegates, spanning across 57 schools and 4 continents. From the opening of our National Conference “season” with a team lunch at Fire and Ice until the last gavel knock at Closing Ceremonies, SJMUN worked hard to have fun and honor the traditions of our 40+ year old club.

Even before the conference officially began, several students were able to sit in on Brown classes. This year’s BUSUN featured traditional Model UN committees like UNEP and the African Union, as well as historical committees like the Council of Nicaea in 325AD and Ptolemaic Egypt in 100BC. One crisis committee dealt with the 17thc 30 Years War and another grappled with the Troubles in Northern Ireland.

We are very proud that an unprecedented 14 of our 25 delegates were recognized by Brown with awards. Four of those students were recognized as the best delegate in their respective committees, including seniors Christian Suglia and Zachary Coderre (he was honored as best delegate for the second year in a row!), and juniors Brian White and John Hayeck. The ten other students recognized for their excellence in committee were: seniors Chris Copeland, Cam Smith, Paul Igo, Dan North, and Vincenzo Malo; juniors Drew Griffin, Ben Burns, and James Desmond; and sophomores Andrew McNeil and Cam Sheehy. While SJMUN does stress that Model UN is not about awards and rather about compromise and diplomacy, we are still proud of this recognition by Brown University’s MUN.

Faculty moderators Mr. Chuck Abdella ‘92, Mr. John Berger and Mr. Kevin Browne (at his first National Conference since joining our team) did an excellent job planning the logistics of the trip as well as advising the students. Head delegates Chris Copeland and Vincenzo Malo did a fantastic job in leading their fellow students at BUSUN, especially considering the short time-frame they had to prepare for this conference. Overall, SJMUN had a great time at BUSUN XIX and we cannot wait for next year!

See all photos from SJMUN's trip to Brown.
Back