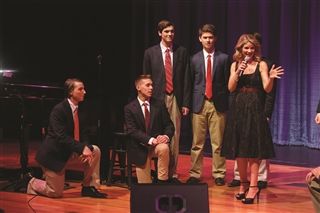 The new performing arts center, the impressive center piece of the recently completed Founders Hall, did not fail to awe guests new to Saint John’s and familiar to the school on the night of its grand opening.
GRAND OPENING

The Robert R. Jay Performing Arts Center opened in with a touch of Broadway as alumni, benefactors, families, teachers, and friends of Saint John’s High School walked the red carpet under search lights leading into the atrium of Founders Hall. 350 invited guests enjoyed a cocktail reception in the Remillard Family Atrium before filling the new theater space for a show unlike any the school had seen before.

The Saint John’s Drama Club then enchanted the audience with song and dance from Irving Berlin’s White Christmas, which they had spent the weekend performing on the same new stage. Hal Knowlton ’17 and Daniel Murphy ’18 charmed as the leads while student singers danced to the classics Happy Holidays and Let Yourself Go

Headmaster Michael Welch ’78 beamed as he followed the students on stage. He remarked that the last time Saint John’s built a theater was in 1891 when the old building was constructed on Temple Street. He thanked many devoted arts faculty for their steadfast work and support of the arts over the decades, benefactors who helped make Founders Hall possible, and the Board of Trustees whose foresight and encouragement leading to this initiative. Mr. Welch extended his gratitude to the members of the Plant Committee, Lauring Construction Company and their team of sub-contractors, many of whom are Saint John’s grads, as well as architect Kevin Chrobak of Juster Pope and Frazier. He continued on to recognize Plant Manager Eric Ring, who oversaw this project.
“Founders Hall and the Robert R. Jay Performing Arts Center are focused on honoring those who came before us, while at the same time instilling a vision for the future that will serve generations to come.  Saint John’s is blessed with outstanding alumni who dedicate part of their lives to forwarding the mission of our beloved alma mater.  Dr. Jeffrey Jay is a shining example of this reality.”

Jeffrey Jay, M.D. ’76 grew up with a keen understanding about what it means to sacrifice for a good education. He fondly recalled the old car with a broken muffler that his dad would drive him and his siblings (Thomas ’78, Andrew ’80, and Tracy NDA ’78) to school in every day. “My dad could have driven a fancy new car or worn new suits, but instead he chose to drive that used, navy blue Thunderbird that made my ears ring, and instead invest the savings in a Saint John’s education for his three boys.”

Decades later, that sacrifice has transformed into a beautiful opportunity for thousands of students today and in the future. His generous gift made the new dedicated arts and learning spaces at Saint John’s a reality, and that sacrifice lives on in the Robert R. Jay Performing Arts Center.

Eric Butler ’02, Director of Development, introduced Kelli O’Hara and offered his heartfelt thanks to all of the many individuals who made the night possible, from the benefactors to the dedicated staff and students.

From the moment she walked out on stage, Ms. Kelli O’Hara stunned the audience with her powerful renditions of some of her tried and true favorites. After opening with “Tonight” from West Side Story, she sang “I Could Have Danced All Night” from My Fair Lady, Carousel’s “If I Loved You,” The Light in the Piazza’s title song, and "I'm in Love with a Wonderful Guy" (South Pacific). Ms. O’Hara’s performance of "O Holy Night" left the audience enraptured.

In between her mesmerizing performances, Ms. O’Hara shared stories of her upbringing and early days on stage, which started in adolescence as she explored her passion in her own high school’s theater. Her charming stories and coincidental connections to the Saint John’s community delighted the crowd.

Ms. O’Hara is a six-time Tony Award nominee and reigning Tony Award-winning Best Leading Actress in a Musical for her role as Anna Leonowens in Lincoln Center’s The King and I. She took a trip to Shrewsbury on her one night off from eight weekly shows for an evening of song and celebration as Saint John’s officially opened the Robert R. Jay Performing Arts Center in Founders Hall. She mentioned that she might need some help singing one of the songs she performs every night, Getting to Know You, so several students joined her on stage to sing.

As she told the T&G before the show, Kelli “knows firsthand the impact a high school performing arts program (and performance space) can have. ‘I moved to a new high school my junior year," she said. "I was apprehensive about the move, but my new school had a great theater program and a new arts center was being finished just in time for my senior year. The excitement of that, getting to do the first shows in that space during my last year of high school, really lit a fire in me and gave me great pride about what I loved.’" Read the full article at telegram.com.

On Broadway, Kelli has also appeared in The Bridges of Madison County*, Nice Work if You Can Get It*, South Pacific*, The Light in the Piazza*, The Pajama Game*, Dracula, Sweet Smell of Success, Follies, and Jekyll & Hyde. (*Tony Award nominations)
Additionally, Kelli starred as Mrs. Darling in NBC’s live telecast of Peter Pan alongside Allison Williams, Christopher Walken, and Christian Borle. And on New Year’s Eve, Kelli made her Metropolitan Opera debut in Susan Stroman’s acclaimed production of The Merry Widow with Renée Fleming.

Eric Butler commented that she has time and again "proved to be a true champion of the arts and arts education."

ABOUT THE PERFORMING ARTS CENTER

The Robert R. Jay Performing Arts Center is located in the newly constructed Founders Hall. Student actors and musicians already have several performances under their belts, after having performed three productions of White Christmas in the center's 350-seat theater - with state-of-the-art lighting, sound and fly technology as well as full orchestra pit and hydraulic lift. Aside from student use, the space is intended to be utilized by people outside of the school community as a theater and speaking venue. Learn more about how SJ does the arts.

Eric Butler remarked that the school “has a long history of strong athletics and we still do. But St. John's has so much more to offer. We want to make sure we're serving all our students’ interests.”


See all pictures from the grand opening!