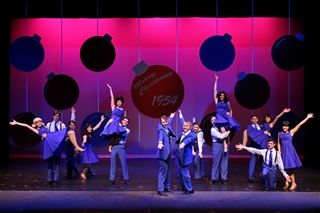 Students performed the classic holiday musical White Christmas in the brand new theater space.
Over the course of the weekend leading up to the Grand Opening of the Robert R. Jay Performing Arts Center in December, student actors and musicians put on a show of spectacular proportions for sold out crowds.

The first of many theater and musical productions at the school, this show served as a magnificent catalyst to the arts expanding at Saint John's High School.

Based on the beloved, timeless film, this heartwarming musical adaptation features seventeen Irving Berlin songs and a book by David Ives and Paul Blake.

Veterans Bob Wallace and Phil Davis have a successful song-and-dance act after World War II. With romance in mind, the two follow a duo of beautiful singing sisters en route to their Christmas show at a Vermont lodge, which just happens to be owned by Bob and Phil's former army commander. The dazzling score features well known standards including Blue Skies, I Love A Piano, How Deep Is the Ocean and the perennial favorite, White Christmas.

Learn more about theater, music, and the arts at Saint John's, including upcoming productions and the recent grand opening of the performing arts center.
Find pictures of the talented cast and incredible sets from White Christmas in our online photo album (photos courtesy of Paige Crane Photography)