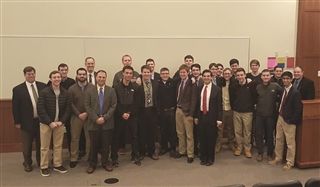 On Thursday, January 7, SJ’s longest running club paid tribute to its roots and invited alumni back to school.
Saint John’s Model UN is well into its fifth decade of diplomacy and debate, and has only grown since its early days in the 1970s with former history teacher Carl Wilson at the helm. To recognize the long history of the club, moderator Chuck Abdella ’92 gathered current MUNers and invited SJMUN alumni of all ages to learn about the club’s beginnings and evolution. More than a dozen alums made their way back to Saint John's to reconnect.

Check out the video that was created for the club’s 40th anniversary in 2013. Since it was originally shown, the club has continued to participate in several conferences throughout the year, including hosting the popular SJMUNC at the school. Read more about this year’s successful conference. Student delegates will travel to the University of Chicago in February for the 27th straight year to participate in the annual conference.

The tradition of sharing the history of this illustrious club with former and current members began when SJMUN celebrated its 40th anniversary On January 23, 2013. SJ Model UN students and 20 former Saint John’s Model UN members gathered in Remillard Hall to celebrate the event, and received an unexpected guest that afternoon. The gathering happened in conjunction with the Abdella Center for Ethics’ January 2013 lecture, during which former UN ambassador Madeleine Albright addressed more than 1,000 people in the Coaches Pavilion. Secretary Albright arrived early enough to visit with the students and MUN alumni. Midway through the reunion, she surprised the attendees in Remillard.

Dr. Albright expressed her sincere joy to be at Saint John’s and spoke of her involvement with her high school Model UN club in Colorado, which helped lay the groundwork for her to pursue a lifetime of public service and a career in international diplomacy.

Tim O’Donnell '13, then club president, greeted current students and Model UN alumni with a few words on how MUN has shaped him into a more informed and compassionate citizen of the world. “Although we all come from different backgrounds and have different perspectives on life, we can usually come to a compromise in a committee and pass a resolution that the majority of the committee votes in favor of,” commented O’Donnell.

During her lecture, Albright spoke of the sense of global responsibility that belongs to all people. “Everyone,” she remarked, “must participate in solving shared problems” through conscious listening, discerning, and compromise. “We should use our opinions to start discussions, not end them, and we should never be satisfied.”

More than just opening the eyes of students, the club has allowed its members the opportunity to see the myriad of ways in which their actions can affect the lives of others in a positive way. “The Saint John’s administration always stresses the concept of brotherhood,” said O’Donnell, “and I have truly experienced it in this club. Brotherhood is a tough thing to define but I understand it as being part of a community in which each person looks out for one another and wants the best for each other.”

The brotherhood of Saint John’s, through Model UN and a multitude of other academic and extracurricular endeavors, is brought into the context of the global community.