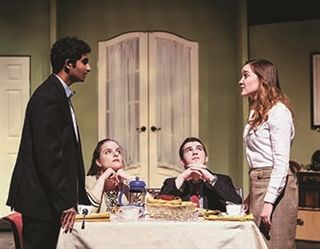 A cast of five entertained audiences with this sophisticated winter drama production.
Saint John's students John Ledoux, Adi Nathan, and Alex Pickering performed spectacularly as three members of the five-person cast. Private Lives was performed in the Black Box Theatre from February 4 - 6, 2016.
This sophisticated and uproarious show is one of the most entertaining plays ever written. Elyot and Amanda, once married and now honeymooning with new spouses at the same hotel, meet by chance, reignite the old spark and impulsively elope. After days of being reunited, they again find their fiery romance alternating between passions of love and anger. Their aggrieved spouses appear and a roundelay of affiliations ensues as the women first stick together, then apart, and new partnerships are formed.
Miss the show? Check out the photos from the winter production of Private Lives.
Back