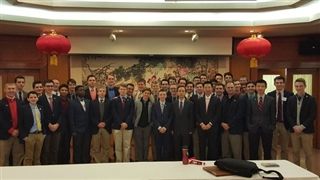 When Model UN attended the University of Chicago's conference for the 28th year, they visited the Chinese consulate, spent time with SJMUN alumni, and brought back several awards!
Written By: Sam Malone ‘17, Nat Newman ’16, and Christian Suglia ‘16
From February 4th through the 7th, the Saint John’s Model UN team attended the Model United Nations Conference at the University of Chicago for the 28th consecutive year, making us one of only four schools to have attended each and every conference.

The 28th session of MUNUC was the largest to date, with delegates from an astounding eleven countries. SJMUN brought 36 delegates and was led by Mr. Chuck Abdella ‘92, Mr. John Berger, and for the first time, Mr. Kevin Browne. Our students participated in 19 different committees representing mainly China, but also Palestine and other individuals in specialized and crisis committees. As the majority of our students were representing China, we were honored to visit the Chinese Consulate in Chicago, where the Vice-Consul Jun Liu spoke to us about China’s history and current positions within the UN.

SJMUN had an astounding 16 of our delegates come home with awards and we could not be more happy with their performance. Christian Suglia and Nat Newman in the United Nations Security Council and Ryan Sheehy and Jack O’Leary in the UN Commission on Science and Technology for Development were recognized with Outstanding Delegate, the highest award attainable at MUNUC. Additionally, the students who were recognized with other degrees of awards, Honorable Mention or Verbal Recognition, are: Paul Igo, John Button, Chris Copeland, Joshua Loiselle, Greg Laporte, David Lee, Alex Crolais, Dan North, Vinchenzo Malo, Ruchir Chaturvedi, Andrew McNeil, and Zach Coderre. Although SJMUN emphasizes that there is no “winning” in Model UN, and awards do not dictate who did and who didn't perform well during conferences, we are still nonetheless extremely honored to have almost half of our delegation recognized with them.

SJMUN prides itself in having many traditions while in Chicago. On the first morning of our trip, we ate at the Billy Goat Tavern, the famous Cheeseburger joint that the “Cheezbourger Cheezbourger” Saturday Night Live skit is based on. The Billy Goat is not only famous but the owner has an SJ connection as his son-in-law is Mark Constantinou ‘01. We also had our team dinner at Pizzeria Ora, where we enjoyed authentic Chicago style deep dish. This tradition is now 11 years old and we are grateful for the hospitality of owner Mr. Walid Bitar, an honorary member of SJMUN. Another tradition while in Chicago is the annual football team, where rookie Mr. Browne conquered veteran Mr. Abdella in an overtime shootout to break a tie game.

Finally, the faculty moderators were very excited to meet with SJMUN alums Tom Ancona '03, Russell Johnson '05, and Sean Langan '10! Overall MUNUC was another great conference for SJMUN and we cannot wait to return next year!

Check out more pictures from SJMUN's 2016 Chicago excursion in our online photo album.
Back