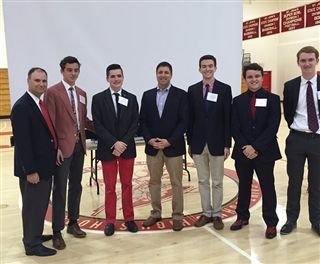 Secretary Beaton wasn’t the only alumnus at SJMUNC XXIX; he was joined by Tom Ancona ’03, Cory Sagerstrom ’16, and former president of the club Nat Newman ’16 at the conference. All have close ties to Saint John’s and voluntarily took time out of their day to join the Model UN club. In addition, we enjoyed a delicious breakfast and lunch due to Mr. Eric Jasmin P’12 of Eric’s Patisserie in Worcester, who has catered SJMUNC since 2011.

The conference went very well and provided a great Model UN experience for all the delegates. There was a broad span of committees during the conference. They ranged from General Assembly committees such as the World Health Organization (WHO) and United Nations Environment Programme (UNEP) to more specialized committees like the 1960 Presidential Election, The Continental Congress, the Ancient Roman Senate, and the contemporary Security Council.  To say the least, there was plenty of discussion among delegates who came from as far away as Boston, Cape Cod, and Connecticut to join us.

None of this would have been possible without Secretary General Sam Malone ’17.  Sam put hours of work into making sure the conference was a success. Faculty moderators Mr. Chuck Abdella ‘92, Mr. John Berger, and Mr. Kevin Browne helped a great deal in ensuring that the conference provided a worthwhile experience for all those in attendance. Thank you to all that participated in the conference, it would not have been possible without your support.  Feel free to follow us on Twitter @SJMUN for updates on all of our activities this year, including our ninth trip to Brown University’s MUN Conference in November and our 29th trip to Chicago in February.

Check out more pictures of the hundreds of student delegates. 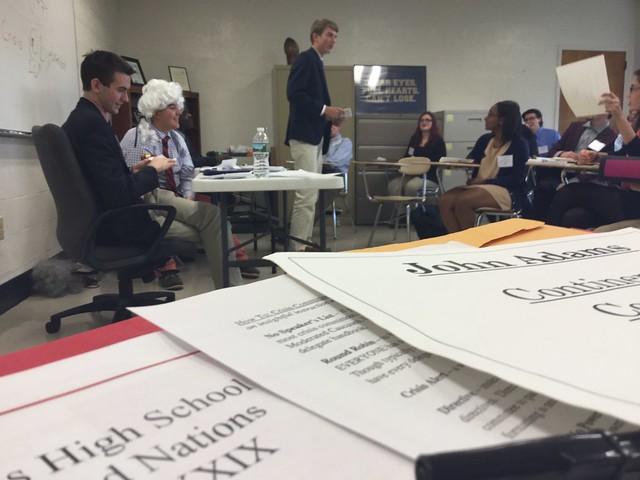