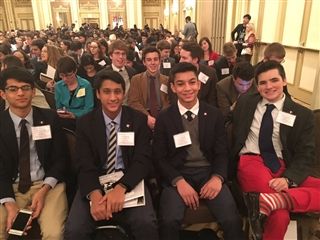 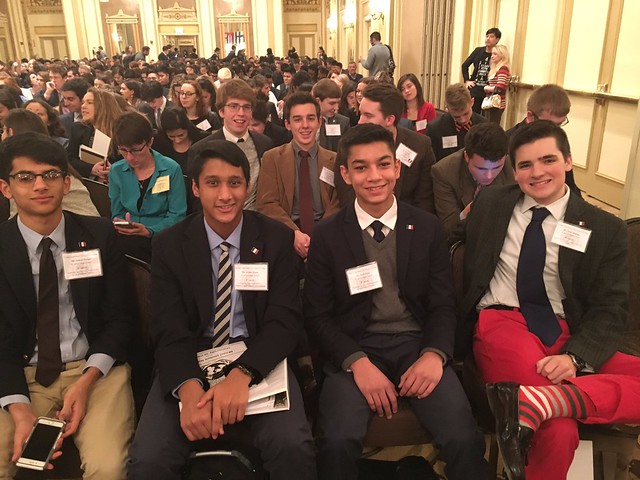 36 students led by moderators Mr. Chuck Abdella ’92, Mr. John Berger, and Mr. Kevin Browne as well as Head Delegates Ben Burns, Drew Griffin, and Sam Malone (all class of ’17) headed out very early Wednesday morning, February 1, thanks to airport transportation from Foxy Travel and the Menard family whose two sons graduated from SJ.  The SJMUN delegates participated in 22 different committees covering pressing topics in today’s world, as well as in an historical context.  Some of the committees included: the United Nations Security Council, NATO, the Cabinet of Russia (2004), International Criminal Police Organization, World Cities Summit, and many more.

The club is proud to announce that 11 of our delegates received awards at the conference. The award winners are: Stephen Johnson ‘19, John Whalen ‘17, Dan Ramirez ‘19, Caleb Rocha ‘19, Cam Sheehy ‘18, John Button ‘18, Ben Burns ‘17, Chris DeWolfe ‘17, John Hayeck ‘17, Sam Malone ‘17, and Drew Griffin ‘17. Although the goal of Model UN is not to “win” but rather compromise, SJMUN is very proud of all its members in a successful conference.
The trip to Chicago for Model UN is not all business. While in Chicago, SJMUN has many traditions. Thursday morning the club visited the Billy Goat Tavern, famous for its “Cheezborger, Cheezborger” skit in an episode of Saturday Night Live.  The owner’s son-in-law is SJ alumnus Mark Constantinou ‘01. While in the Windy City, the three moderators met up with SJ alums Russell Johnson '05 and Sean Langan '10 as well.

Another part of the club’s tradition is the annual football game at Millennium Park. The game ended in a 14 to 14 tie between team Abdella and team Browne, with Mr. Berger as the referee. After the football game, we celebrated the end of our National Conference season with a Team dinner of Chicago deep-dish pizza at Pizzeria Ora, owned by Mr. Walid Bitar, who is considered family to SJMUN.
Most importantly, SJMUN returned to Shrewsbury three hours before the kick-off to Super Bowl LI—ending our successful trip with the joy of a Patriots victory!
Follow @SJMUN on Twitter to stay updated on SJMUN’s latest!