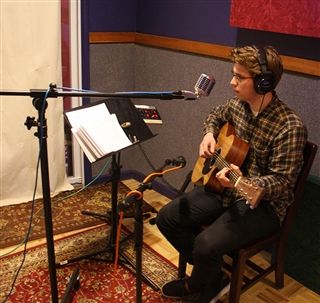 Audio Production Club visited Night Train Studios to record covers & original songs.
At any given Saint John's event, a variety of students lend their musical talents, from powerful liturgical hymns to rousing rock covers. Young musicians can stretch their vocal muscles in the school's chorus, on stage in a musical, in solo and group performances at schoolwide prayer services, and in the informal coffehouse-style acoustic nights.

A group of unseen but definitely not unheard students make the many voices of the school audible at every Mass, concert, acoustic night, and lecture. The Audio Production Club has become a place where those students passionate about music and the art of sound congregate. In March, some of them paid a visit to a local recording studio, Night Train Studios, to learn the ropes and lay down some tracks of their own.

Senior Chris DeWolfe has a love of music that his classmates have had the joy of experiencing several times at school events over the years. When he's not toting his guitar on stage, he's behind the scenes, making sure everyone else's mics, equipment, and sound run smoothly. During the club's visit to the studio, he covered the song Furr by Blitzen Trapper and an original song, Post-Summer. Check out both recordings here!

Ben Scharf, a junior, performed an inspiring rendition of Leonard Cohen's Hallelujah at the Thanksgiving Interfaith Prayer Service, and reprised the cover in the recording studio.

Learn more about Audio Production and many other ways students get involved and grow their talents - musical or otherwise - at Saint John's!