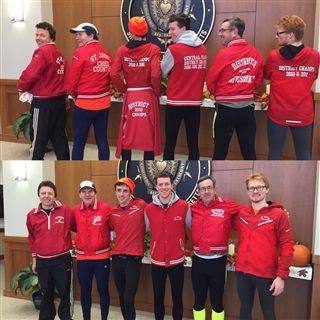 From races to Mass to football, Turkey Day events continue several favorite decades-long traditions at the school.
Thanksgiving morning at Saint John's High School means the alumni Turkey Trot and Mass with the football team before their annual match up.

For 34 years, Cross Country alumni and avid runners of all ages meet on the Cross Country course at 378 Main Street for some early morning laps. Forty alumni, families and friends toed the line for the start of this year's race, in spite of the dreary weather.

The winner of this year's race was Joe Clark '12 who blazed to time of 16:57.0 eclipsing the alumni record of 18:06.5 that he set in 2012 but also the school record of Peter Monahan '16 of 16:57.8 set last year in a dual meet with Shrewsbury High School. Cliff Scott '63 earned the title of most senior finisher at 36:19, future Pioneer Liam Kimball, grandson of Coach Gerry Frew, was the youngest finisher at 36:14, Jane Clarke, sister of Joe, was the first woman finisher at 23:13. The Clark Family, represented by Joe, Jane, Brian and mother Pat, captured the family prize with a total of seventeen points scored by the first three finishers from their family.

Next year is a benchmark year for the Turkey Trot, and the organizing committee is asking people to mark next Thanksgiving on their calendar and plan to make the thirty fifth running of this event the best attended ever.
Turkey Trot photo album. 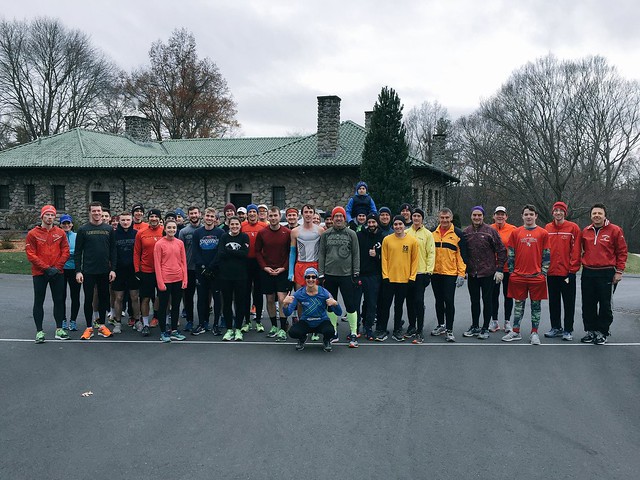 Earlier in the week, Saint John's and St. Peter-Marian school leaders and captains met for lunch before facing off on Thursday's Classic, kicking off a new tradition in the oldest continuous Catholic school football contest in the country.

This Thanksgiving marked the 92nd Saint John's v. SPM rivalry tradition. The game was played at Holy Cross' Fitton Field at 10:30 on Thursday morning, and hundreds of returning alumni and Pioneer superfans enjoyed a stellar show on the gridiron as the Pioneers held off the Guardians 40-32.